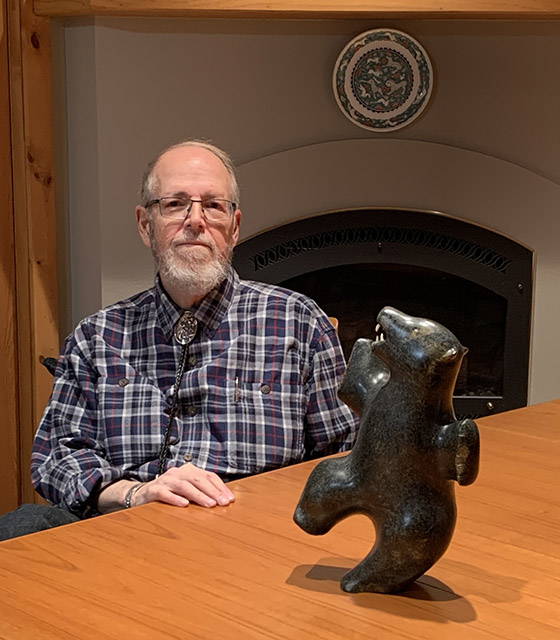 While Sacks became an influential part of the Nelson Institute story, he didn’t set out to work in environmental studies. An English major with a Bachelor’s degree from Brooklyn College (’68) and a PhD (’75) degrees from UW-Madison, Sacks began his career as a teaching assistant in the UW-Madison English department (1969-72). During the writing of his doctoral dissertation, he joined the UW-Madison’s College of Letters & Science (L&S) as the assistant to the Associate Dean of Academic Affairs (1972-1976).

“This position held the full duties and responsibilities of an assistant dean of student academic affairs,” said Sacks. “During these four years I learned about and dealt with virtually all issues—academic, personal, psychological, and financial involving primarily undergraduate students, but graduate students as well. I also came to learn about the academic and faculty affairs policies and operations in L&S and in other campus schools and colleges.”

Sacks says that what he learned during this appointment ultimately led him to be an already experienced candidate for the Coordinator of Academic Programs for the IES Instructional Program, which he accepted in the spring of 1976. Although Sacks says he had a high level of interdisciplinary academic and administrative experience at UW-Madison through his interdisciplinary investigation of 20th century American literature, he knew he had a lot to learn about the field of environmental studies.

“And so I began a purposeful, intense, multi-year period of study to continue the breadth and growth of my own understanding of the sciences, social sciences, and aspects of the humanities to which my higher education experience had left me gravely short,” Sacks said. “I realized that if I was to be truly effective and useful to faculty and staff colleagues and undergraduate and graduate students engaged in interdisciplinary environmental studies, as an academic and as administrator, it was essential that I became far more knowledgeable about the planet and the world, systems theory data collection, calculation and analysis, and how environmental and human systems worked interactively. This intense effort of broadening the breadth and depth of my re-education paid off in more ways intellectually, professionally, emotionally, and personally than I ever expected or can or need to elaborate here.”

As Sacks grew in his knowledge of interdisciplinary environmental studies, he began to take on more roles at the Institute. For example, Sacks was central to the design of the original undergraduate minor curriculum or Institute programs. He also played a large role in the efforts to have new graduate degree programs added, including the MS and PhD in Land Resources, the MS in Energy Analysis & Policy (EAP), the MS and PhD in Environmental Monitoring, and the MS in Conservation Biology and Sustainable Development (the latter two having changed significantly after Sacks’ departure from UW-Madison in 1993).

Sacks says he is also proud of the role he played in bringing major grants to the Institute.

“For example, I am proud of my leadership in fielding a general inquiry to the UW-Madison Admissions Office from the William & Flora Hewlett Foundation, convincing Hewlett that IES merited one of nine U.S. university environmental studies grants it had decided to provide,” Sacks said.

Sacks’ ability to secure this grant as well as others allowed the Institute to start the “Global Integrity Initiative,” a program proposed and named by Professor Calvin Dewitt, that supported IES faculty research and publications, as well as graduate student research engagement. The funding also allowed Sacks to participate in an Environmental Protection Agency (EPA) initiative to expand the 1972 Bilateral Agreement on Cooperation on Environmental Protection, between the U.S. and the, then, Union of Soviet Socialist Republics (U.S.S.R.) signed by Presidents Nixon and Brezhnev a­s a part of this initiative, Sacks joined colleagues from around the U.S. to lead as U.S Chair the effort to work collaboratively with his USSR counterpart, the U.S.S.R. Minister of Education appointed by President Gorbachaev, on environmental education.

“I was extremely proud that the Institute proved to be the key element for organizing and promoting this environmental education cooperation between the U.S. and the U.S.S.R,” said Sacks. “The initial agreement had 11 areas of cooperation covering a full range of environmental issues, ranging from energy created pollution and the reduction of nuclear contamination and weaponry, to common problems regarding climate, soil, water, and forest resources, environmental law, and the Arctic, among additional areas.”

While the work with the U.S.S.R ultimately ended after the breakup of the Soviet Union in 1991, Sacks continued to work with the Russian government and the governments of former Soviet states through the end of the 1990s and continued to encourage Institute faculty and staff to engage in international work. For his work on environmental information, education, and training with the U.S.S.R. and subsequently with Russia he was elected in 1996 as a Foreign Member of the Russian Academy of Education, and served (1990-97) as a Distinguished Visiting Professor of Environmental Studies at the International University in Moscow, Russia.

In addition to his work in the U.S.S.R. and globally (e.g., India, China, Indonesia, Kyrgyzstan, Chile, Morocco), Sacks also became a leader at a national level, joining the National Association for Environmental Education (NAEE) and eventually becoming its President. During his time with the organization, which “seeks to advance environmental literacy and civic engagement through the power of education to create a more sustainable future for all,” Sacks successfully lobbied to have the name changed to the North American Association for Environmental Education (NAAEE). Sacks also invited his long-time friend, Earth Day founder and Nelson Institute namesake, U.S. Senator Gaylord Nelson (D-Wisconsin) to speak at a NAAEE conference.

Of all of his accomplishments during his tenure with the Institute, however, Sacks says he is proudest to have “been supporting, defending, and promoting –nationally and globally – what I have identified as the Institute’s legacy and, at times, the Institute’s very existence.”

For Sacks, who was there in the early days of the Institute, watching the past 50 years of work accomplished by the Institute’s faculty, staff, and students has been a wonderful and meaningful experience. Sacks says he can recall the early years that led to the Institute’s existence, when the University leaders began meeting to discuss its “ethical responsibility to prepare current and future generations to see the human condition clearly and completely and to engage in solutions to current and future problems.”

According to Sacks, this initiative was instigated by a very far sighted Board of Regents of the University of Wisconsin and the University President at the very outset of the 1960s. The Regents had asked the University to explore “The Future of Mankind” and what the role of the University—and higher education—is and should be in that future. Sacks says it was the faculty leaders appointed to a budgeted Interdisciplinary Committee on the Future of Man that set the groundwork and developed a proposal to create the Institute for Environmental Studies, formally recognizing that “cooperation and collaboration across current, emerging, and future disciplines would be key to its future success promoting the sustainable improvement and advancement of the human condition.

“So, at the heart of the Nelson Institute’s legacy is the critical realization that in the modern University that seeks to comprehend the immense and increasingly complex environmental and societal challenges faced by the global community, interdisciplinarity – integrating all essential disciplines – is critical to such understanding. And without such understanding given humankind’s vast and quick population growth and its dramatic technological advancement it would become more and more difficult, indeed impossible to avoid the environmental and societal mistakes of the past and develop solutions to advance and sustain a planet worth inhabiting,” said Sacks. “This realization by the Committee led to the creation of one of the very first (1970), most lasting, most successful interdisciplinary education, research, and outreach programs in the US and internationally. The Institute has conducted 50 years of work to bring together, in friendly collaboration, individuals from disciplines in physical and biological science, engineering, social science, and the humanities. This work has demonstrated, informed, and to a large extent significantly transformed both UW-Madison and higher education everywhere. And in the process, the Institute has produced and continues to produce a cadre of baccalaureate, masters, doctoral, and post-doctoral scholars, educators, researchers, managers, societal/governmental/public policy leaders and the general public – citizens – who are better able to put the pieces together to understand how the World and the Earth work. The Nelson Institute has demonstrated that both the world and the Earth must be preserved and advanced through thoughtful, ethical, purposeful personal and community behavior, public policy decisions, and an economy that sustainably serves all of humanity. This is its momentous achievement, its essential legacy.”